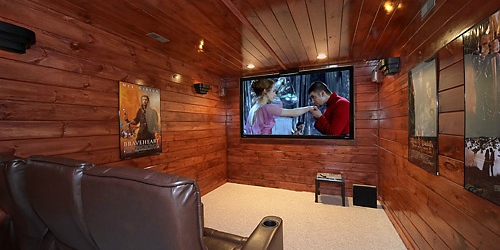 It is easy to hire someone to install a home theater, but many people prefer to do it themselves to get it right the first time. Home theater installers often cut corners to save time, and the theater ends up appearing sloppy, or something disconnects and malfunctions at some point. This can cause damage to the equipment, or even cause a fire in some circumstances. For anyone wanting to do the install themselves, there are a number of details to pay attention to in order to make sure everything goes smoothly.

One of the most difficult things to do is mounting a television set. Any TV can be set on a stand, but it frees up room space and looks much better when it is flush against the wall. There are certain types of wall mounts that can be used based on the TV’s size, and which specific type is installed is completely up to the user. There should always be a power supply nearby, and cords can be run through the wall if the perfect spot for the TV is not particularly close to the power supply. Having a TV far away from power can look messy with a single cord running through the room. Lastly, the mount needs to be attached to studs rather than to the bare wall. Most mounts are able to be adjusted to accommodate various stud positions, and if a mount is installed incorrectly, there is a high chance the television will fall off of the wall eventually.

Speakers also give many people a lot of trouble. The many wires that run between the speakers look bad and have to be fastened, often looking messy against a solid colored wall. There are two different running methods that people normally use. The first is running the wires through the wall, which can be very difficult to do in some homes. Most people elect to run the wires inside the room but secured against the corners to make them less noticeable. This can be made easier with the use of wires and fasteners that match the colors of the walls and ceiling. In this case, it is important to size the wires large enough to where they can run in the right places, but can be trimmed short so there is not a nest of extra wire next to the amplifier.

The placement of home theatre furniture is important in getting the optimal effect and comfort. Placing the home theater seating in the middle of the room directly facing the television is very important in making sure the balance of sounds and light from the screen hits the viewers correctly. The size of the screen plays a big role in how far the seats should be placed from the screen, but this can be played with a bit before the user finds out what is right for them. Most surround sound systems can be tweaked to bring the sound from front to back if needed.